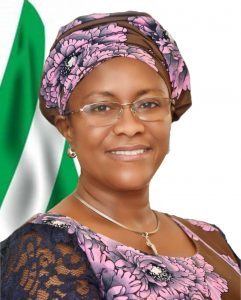 Dr. Evelyn Ngige was born on 11th of February 1965. She is from Ibusa in Oshimili North Local Government Area in Delta State. She attended Our Lady of Apostles Private School from 1970 to 1975 and Queens College, Lagos from 1975-1983. She obtained the West African School Certificate Ordinary Level with Division 1 and the HSC Advanced Level. Thereafter, she was admitted to the College of Medicine, University of Lagos where she graduated in 1988 with Bachelor of Medicine, Bachelor of Surgery (MBBS) Degree. In 1991, she obtained a Postgraduate Diploma in Anaesthesia from the School of Postgraduate Studies of the University of Lagos.

Dr. Evelyn Ngige joined the Federal Civil Service in June 1992 as a Senior Medical Officer and worked in various Federal Staff Clinics and the Federal Staff Hospital 1004 Estate, Victoria Island, Lagos. In 1996, she proceeded to the Lagos University Teaching Hospital for the Residency Training Program. In 2003, she obtained the Fellowship of the National Postgraduate Medical College of Nigeria and was appointed Consultant. In 2006, she was assigned to the National AIDS and STIs Control Program (NASCP) where she headed the Prevention Unit. In 2007, she was promoted to the rank of Consultant Special Grade 1, Salary Grade Level 17.

She was later appointed National Coordinator of the National AIDS and STIs Control Program (NASCP). She spearheaded the development of the 1st National Hepatitis Policy Document in Sub-Saharan Africa, which provided the impetus for intensified efforts geared towards resource mobilization for Hepatitis control in Nigeria. She was also drafted to work with the team constituted by the Honourable Minister of Health to develop the Response Plan to Ebola outbreak in 2014. Her tenure as the National Coordinator of NASCP recorded remarkable reduction in the prevalence of HIV/AIDS in Nigeria.

Between 2016 and 2019, Dr. Evelyn Ngige was Director Public Health (DPH) Department in the Federal Ministry of Health. As DPH, she facilitated the conduct of the National HIV/AIDS Indicator and Impact Survey (NAIIS), the largest population-based HIV Survey ever conducted globally. She introduced electronic certificate of vaccination, e-yellow cards, for international travelers to address the counterfeiting of the cards, which was then, a source of national embarrassment for Nigeria.

As DPH, she midwifed the establishment of the National Tobacco Control Committee (NTCC) and facilitated the passage of the National Tobacco Control Regulations (NTCR). She was instrumental to the development of the first Multi-Sectoral Action Plan for Non-Communicable Diseases Control in Nigeria and other national policy documents guiding interventions in the Public Health Sector. While heading the Public Health Department in the Federal Ministry of Health, Dr. Evelyn Ngige supervised and coordinated the National HIV/STIs, National Malaria Elimination, the National Tuberculosis/Leprosy Control, the Non-Communicable Diseases and the Neglected Tropical Diseases Control Programs.

Over the years, she has acquired expertise and experiences, local and international, in Organizational and Operational Research; Grants and Resource Mobilization; and Management for Good Governance. In the line of her duty, she has represented and been part of numerous national delegations to International fora on Public Health. She has also attended various capacity building courses, both locally and internationally, in Public Health including a certificate course in Human Resource for Health Professionals at the Harvard University. She recently obtained a Master of Science in Public Health from the London School of Hygiene and Tropical Medicine. Dr. Evelyn Ngige has authored and co-authored several scientific publications.

Before her redeployment in August, 2021, she had commenced the process of finalizing various Service-wide Public Service Welfare initiatives intended to boost the morale of public servants for more efficient and effective discharge of their duties. Amongst these were the Public Service Affordable Bus Scheme (PSABS) and Federal Public Service Entrepreneurship Scheme (FPSES). In order to reposition the SWO for enhanced performance, she initiated and obtained approval for the restructuring of the office, which led to the creation of an additional Department, the Insurance Administration Department for effective management of Group Life Insurance (GLA) Scheme and processing of death claims for the Next of Kin of deceased officers who die in active service.

In December, 2020, she was saddled with additional responsibility of overseeing the Common Services Office of the Office of the Head of the Civil Service of the Federation following the redeployment of the substantive Permanent Secretary. In August, 2021, she was redeployed to the Federal Ministry of Industry, Trade and Investment, where she assumed duty on 6th August, 2021.