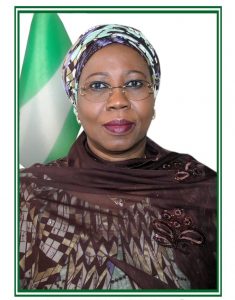 Amb Katagum, an educationist, diplomat and international cooperation expert with leadership experience in the Nigerian public service and within the United Nations System, was born on 18th November, 1954 in Azare, Bauchi State, Nigeria.

She obtained a B.A (Hons) English and Graduate Certificate in Education at the Ahmadu Bello University, Zaria, Kaduna State (1976); M.Ed. in Administration and Planning at the School of Post Graduate Studies, University of Lagos, Akoka-Yaba, Lagos State (1985) and a Certificate in Social Development Policy, Planning and Practice at the University College London, London, United Kingdom (1999).

She served as Ambassador, Permanent Delegate of the Federal Republic of Nigeria to the United Nations Educational, Scientific and Cultural Organization (UNESCO), Paris, France between 2009 and 2019.

Amb Katagum is versed in international and multilateral negotiations, inter-governmental and policy processes in the fields of education, the sciences, culture and communications particularly under the auspices of UNESCO.

Some of her books, publications and unpublished research include: