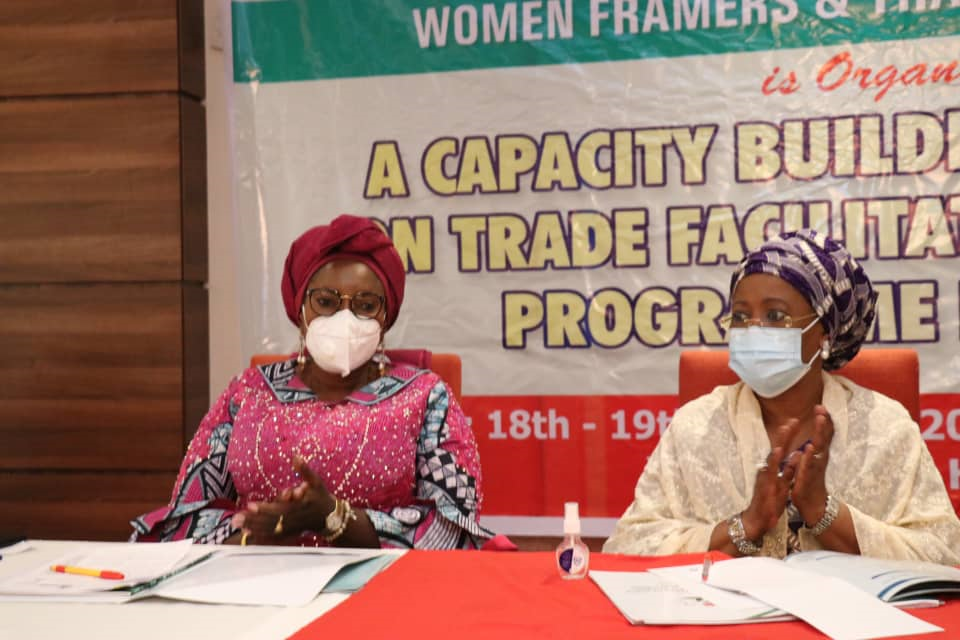 Minister of State for Industry, Trade and Investment, Amb.  Mariam Yalwaji Katagum, has disclosed that the Federal Government is working assiduously to increase foreign exchange earnings on non-oil export trade by $150 billion for over a period of ten years.

The Minister stated this at the opening ceremony of a two-day capacity building workshop for members of Women Farmers and Traders Association (WFTA), organized by the Ministry in collaboration with the association in Kano

She stated that with this zero-oil plan, the Federal Government was capitalizing on non-oil sector to exploit abundant deposit resources, while discouraging over-dependence on oil, adding that, “The move will enhance the productive competitive advantage of States in Nigeria, she said.

She added that the Ministry of Industry, Trade and Investment was committed to its mandate of accelerating diversification of the country’s economy for growth and development, jobs creation and poverty alleviation with specific focus on women-owned business.

Katagum pointed out that the capacity building for women farmers and traders on trade facilitation was aimed at broadening knowledge on process and procedure of import and export trade.

She expressed concern that in spite of the fact that opportunities abound in the African Continental Free Trade Area (AfCFTA) and Africa Growth Opportunity Act (AGOA), Nigerians, especially women had not taken the advantage to grow their businesses due to lack of knowledge on the process.

Amb.  Katagum noted that Kano State has 19,042 beneficiaries under the Federal Government’s Micro Small and Medium Enterprises (MSME) Survival Fund and under the Formalization Support Scheme, 7,927 out of 8,406 certificates had been generated for Kano businesses, totaling N47.5million.

In her keynote address, the Minister of Women Affairs and Social Development, Dame Pauline Tallen commended the Federal Government for choosing to train the beneficiaries on the World Trade Organization (WTO), Trade Facilitation Agreement (TFA) and AGOA.

Dame Tallen  said it was statistically accepted that women produced about 60 to 90 per cent of all food grown, processed, stored and marketed in Nigerian local communities, adding that in Nigeria, women constituted about 70 per cent of those engaged in MSMEs, and that it was painfully discovered that women were always relegated as a result of social, economic, political and cultural factors.

She stated that “The Federal Ministry of Women Affairs is the National Machinery through which the Federal Government of Nigeria addresses issues and concerns of women and children and other vulnerable persons; including women and children with disability in the country. The Ministry works with state counterparts (Ministries of Women Affairs and Social Development), other Ministries, Departments and Agencies, as well as with Development Partners, the Donor Community and Civil Society Groups to achieve its mandate. It is pertinent to state that women’s contributions to economic development as we speak start from the home, where families are groomed to go into the larger society. It is also important to note that most of the house chores or succinctly referred to as domestic jobs are executed by women”.

She added that “In contemporary Nigeria, the majority of women are engaged in one productive activity or the other ranging from their involvement in entrepreneurship activities, such as farming, and the entire agricultural food chain, craft, and white-collar jobs and are making exploits in their different capacities”.

In her welcome remarks, the National President of Women Farmers and Traders Association, Hajiya Aisha Suleiman Baffa, stressed that there was a need for multi-sectoral coordinated action and for government to set an enabling policy environment, among other issues, to promote and encourage the sector.

Hajiya Baffa who lamented the difficulties in sourcing finance and getting products registered with government agencies, urged the Ministry to create an atmosphere for ease of doing business in Nigeria.